In this plasma reactor, or “fuel processor”, the incoming fuel goes in the opposition direction to outgoing exhaust in a chamber that surrounds the fuel, heating up the fuel. In the middle of this exchange chamber is a rod of a certain composition and length, which takes on magnetic polarity. Supposedly as the fuel encounters these conditions, by the time it exits past the rod, it turns to a plasma state, at a relatively low temperature, and the fuel molecules are broken down into their most elemental state, creating a new fuel state.

This new state burns more completely, with little or no emissions. Its properties are different than what petrol products (i.e. implosion rather than explosion). It’s this plasma phenomenon that explains why a wide range of substances can be fed into the reactor as fuel, such as wasted cooking oil or wasted engine oil. This engine will also operate a crude oil, yes, unprocessed oil from an oil well. It’s similar to what a plasma arc does in a municipal waste-to-energy plant, except this operates on a very small scale. Specifically, a converted generator can produce between 5kW and 250kW.

The following is an image of the conversion kit components: 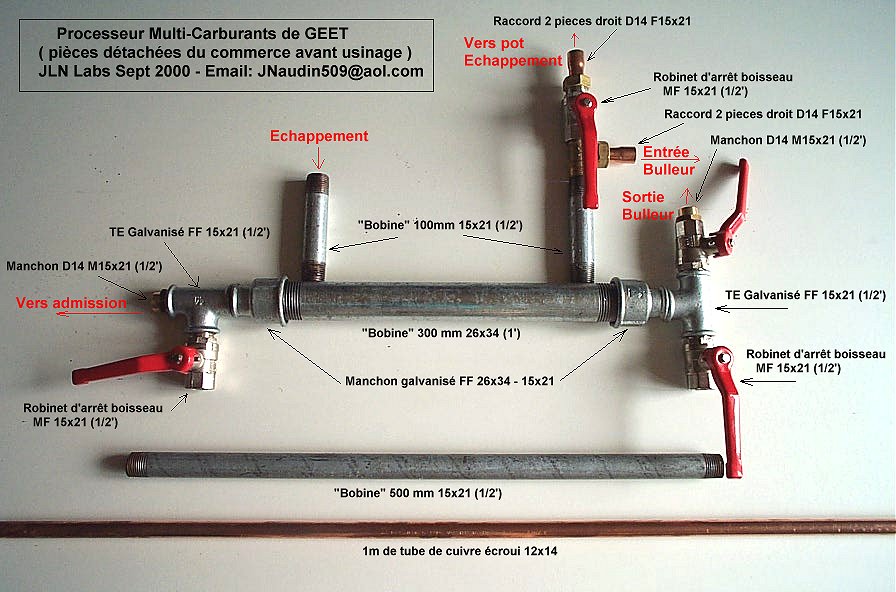 The kit comes with all parts needed to make a basic reactor including the rods for all three application positions. They are constructed of 304 Stainless Steel. Laser cutting assures precise joints and machine welds means solid joints. After the fitting is complete, it’s only necessary to drill four 4 holes and make 11 spot welds to have a lightweight heavy duty plasma reactor.

The following is a diagram of how the technology functions.

There are of course limitless applications for this system. Consider what the oil industry has created in terms of opportunities for new technology or new uses of the same technology and fuel from sustainable sources. Furthermore, once the modifications are completed, on a standard generator for example, there are little or no pollutants that require the system to operate outside or in a well-ventilated area. In fact, this system can operate in small cement enclosure where noise pollution can be greatly reduced.

It seems best to operate this system at the same locations where there is a steady supply of waste oils, such as near restaurants.

The following is an illustration of how a lawnmower would be retrofitted:

TechNavio’s analysts forecast the global diesel and gas generator market to reach $16.5 Billion by 2016. One of the key factors to this market growth is the increasing concern over the energy deficit. The global diesel and gas generator market has been witnessing the development of the next-generation generators. However, the need to comply with government regulations and guidelines could pose a challenge to the growth of this market.

It is possible to purchase basic generators at very low cost, but moderate volume, and have them modified using the plasma reactor. One supplier is alibaba.com and you can find a range of generators at: http://www.alibaba.com/showroom/generic-gas-generators.html

The wood gas generator market is present mainly in the United States and Canada in North America; Finland, Norway, Germany, the United Kingdom and Sweden in Europe; Japan and Korea in the Asia Pacific region; South Africa and Brazil in the Rest of the World.

In my opinion, this only helps to create acceptance for the fuel processor/plasma reactor modified generators.

There are no threats to new entrants. NAFTA has paved the way for smooth trade with Mexico. Additionally, Mexico’s electricity industry is booming. The Mexican government estimates the need for total investment in the industry to be $50 billion over the next ten years. They estimate the need for an additional 26,000 megawatts over the next eight years. One advisor to Mexico’s Energy Secretary said that over 50% of the investment in the industry over the next 10 years is expected to come from the private sector. He added that reforms to be put before Congress this fall may increase that number significantly.4

In this fertile market, firm rivalry will be significant. This industry is growing rapidly and Mexico’s market is ready. It will be important to get in first and establish a market share. There will be numerous competitors, primarily from the U.S. and Canada. In the beginning as companies follow slightly different lines of development, there will be some product differentiation which will taper over time.

Threats of substitute products include other form of energy production including wind, solar, and grid supplied power. With utilities being privatized, grid power may pose a serious threat to general consumer acceptance of this product limiting the market of this product to critical systems and rural applications. In the rural applications wind and solar power may provide formidable competition.

Brazil is currently having a major energy crisis due to the most severe drought in seventy years. Over 90% of Brazil’s power comes from hydroelectric dams. Reservoirs that should be over half after the rainy season are instead only a quarter full. The government is requiring electricity consumption cutbacks of 15-25% and doubling rates charged for electricity. Violators who fail to cut back will be punished with fines of up to 200% of utilities cost and subject to having power cut for up to six days. This amid unreliable, overtaxed grids leading to random blackouts. This has likely served as a wake up call that will inspire many Brazilians to look beyond the dam for other sources power. In fact many companies in Brazil are generating their own power.

Due to the intensity of the electricity shortage, there is stiff competition in Brazil. EnergyWorks, a division of Iberdrola S.A., a Spanish utility, has been engaged by several companies. EnergyWorks builds 5 Megawatt mini-powerplants on company grounds. They are expensive and require a commitment to buying electricity for 16-18 years. In view of recent economic instability in Brazil, many companies are not willing to make such a long term commitment.

Threats of substitute products include alternate means of power supply. Brazil has existing electricity supply to combat the current shortfall however there is no infrastructure in place to carry the excess supply to the heavily populated urban areas where the shortfall exists. In view of the current situation, Brazil has plans to create that infrastructure. Officials estimate that it will take about two years to close the gap between existing power supply and high need areas.

Thailand is experiencing an electricity glut. While worldwide electricity reserves are required to be at 15% by international standard, Thailand’s reserves are at 40%. The Electricity Generation Authority of Thailand (Egat) is asking independent power providers who have not yet signed contracts to postpone supply until 2007. They had been planning to provide power starting in 2004. Egat claims that reserves are sufficient to last until 2006 and that is without considering power that Egat is obliged to purchase from plants in Laos and Malaysia.

Despite the electricity glut in Thailand, there is still a market for power generation in critical systems. However, recent economic hardship and underdevelopment make rural customers in Thailand unlikely.

The overzealous power grid in Thailand poses the greatest single threat to sales of on-site systems. With an abundance of electricity the need for on-site generation will appear to be minimal.

As a part of joining the European Union (EU), Greece has been forced to abolish its state run monopoly on the production and distribution of electricity. Additionally, in an effort to meet the objectives agreed to in the Kyoto Treaty, the EU requires that no later than 2010 a minimum of 12% of electricity will be produced using renewable energy. In fact, renewable energy is the main focus of Greece’s energy policy. In 1998, Greece approved 10 wind-energy projects and 25 hydro-electric projects and forecasted a 400% increase in the amount of electricity produced using renewable energy sources. Also, as part of the EU effort to create a single integrated infrastructure, Greece and Italy have recently joined their respective electricity grids by way of a high-voltage DC cable under the Adriatic Sea.

In Europe there is much emphasis on unification between EU countries. This would likely lead to preferential treatment being given to EU based competitors. In a separate study of the aerospace and defense industry an example of this behavior was cited where Raytheon lost a contract for air-to-air missiles to an unproven start-up cross-border European missile company.

The greatest threat is by alternative methods of producing electricity. Greece seems to have sound energy policy as it plans its use of renewable energy sources and its integration with other EU countries.

Some issues such as the bargaining power of buyers and suppliers are common in all countries.

The bargaining power of buyers is significant with large buyers such as the government or universities with medical and computing centers. These buyers would likely be sensitive to price.

The bargaining power of suppliers will relate to companies that emerge as industry leaders and are able to achieve economies of scale. There are currently many companies in the development stages in the United States, Canada, and Europe. Eventually, the number of competitors will decrease and the product will move toward being a commodity. There are already signs of that happening with the PEM component as Dupont and 3M enter the market as major production players.

During the market research phase it became apparent that this product will serve a niche market. Unlike fuel cells used to power cars, stationary power generation units serve essentially two markets. The first is where reliability is paramount such as in hospitals, computer facilities, and emergency services. Secondly is the market of eclectic cabin dwellers far from any grid. All of the countries have the former while probably none have much of the latter. So what rationale is best in selecting only two of the countries? One investment publication put it this way:

“All it would take to stir up a frenzy for fuel cell stocks is a cold winter, a further increase in oil or natural gas prices and/or a major conflict in the Middle East. Any sign of the oil/utility markets having serious turbulence would make the nascent fuel cell industry seem like a quick-fix solution, when in reality it remains a long-term potential play.”6

This analysis of investing in the industry is helpful in determining which markets are best for this product. Using the same logic, the market with the most turmoil around the electricity industry, where electricity is either scarce or unreliable would make the best place to enter the market. Emotion is an unavoidable and even useful part of the buying process. Emotion is the main differentiating factor in looking at the needs of customers in the four countries. While all critical applications need on-site generation, a sense of urgency toward purchasing such a system will be strongest in areas with troubled power supply.

Thailand can be ruled out first because there is an abundance of electricity and no indication of it being problematic.

Second to be ruled out is Greece where increased integration with EU neighbors will strengthen their grid which at this time shows no signs of stress. Additionally, growing ties with European neighbors would likely make competing more difficult.

Among the four choices Brazil is currently the country with the most severe electricity supply problems. Despite economic problems, the crisis around the sector will create more potential buyers. In fact, on-site power generation with PEM based generators may provide sufficient supplementation to grid power while serving as backup for critical systems. And the cost would be significantly less than the alternative 5 megawatt mini-powerplants provided by EnergyWorks.

Finally, Mexico’s proximity to the U.S. and unity under NAFTA make it a good choice. Mexico’s open invitation to investment in the sector is also a plus. Mexico has seen the power woes of its close neighbor, California, and will likely try anything to avoid the same fate.

Having considered such things as the current electricity supply situation and surrounding emotional factors as well as barriers and competition, Mexico and Brazil seem the better choices as target markets.